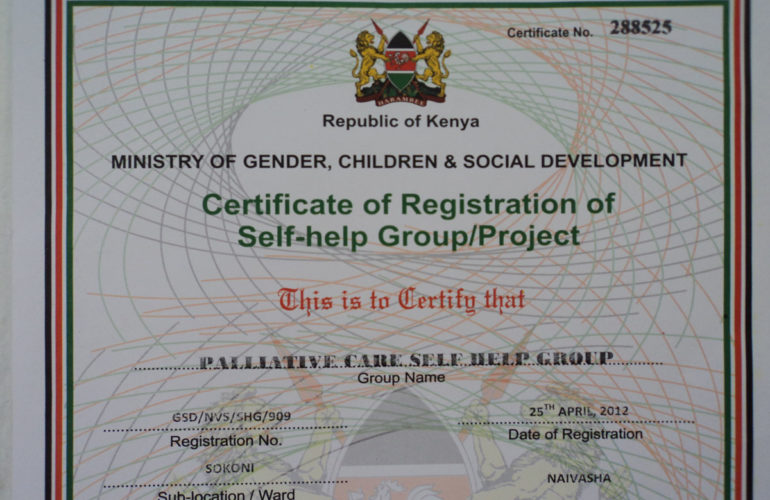 Naivasha self-help group was formed in June 2011 with the sole aim of reaching out to cancer survivors, their families and the community at large.

The palliative self-help group is registered with the Ministry of Gender, Children and Special Development.

It started with a handful of members but the number has increased progressively and currently, the group has over fifty members.

According to the senior nursing officer in charge of palliative care at Naivasha Hospital Mrs. Mary Gacheru, the group meets on the 2nd Tuesday of every month.

During the meetings, Mrs. Gacheru says a facilitator, who is either an internal or an invited guest discusses the main topic of the day that include types of cancers, management, adherence, nutrition in relation to cancer and drugs, risk factors, prevention, care and support including home based care.

She says that the group is also given psychological, spiritual & social support, information on available linkages and an open forum to air out concerns, challenges and get answers to question that may have.

The group is happy to have the Naivasha Hospital Medical Superintendent as their patron and the hospital administration has made it possible for the group to meet within the hospital premises.

Through the support group, Mrs. Gacheru says, needy families have benefited from food support from well-wishers and staff.

She says that twelve homes with orphans are receiving 10 kilograms of maize each from Red Cross Naivasha Branch on a monthly basis.

This is after the branch chairperson joined the group and saw the challenges the survivors were going through.

The Naivasha District Commissioner has also seen the benefit of the group and promised to include the survivors in the relief food program.

From the support group’s awareness campaigns, Mrs. Gacheru says there has been an improvement on the public in taking initiative to seek health care services and advice.

The group has used clinicians to do disclosure to new patients who have been diagnosed with life limiting illnesses as well as linking patients to oncologists.

“Newly diagnosed cancer patients and their families have their knowledge gaps filled in the support group meeting.” Mrs. Gacheru says.

She says that the group has greatly improved awareness in the hospital for patients waiting for services as well as those being attended to.

She adds that the group has created more awareness in churches and schools in order to reach out to the wider community.

“We have managed to carry out home visits and private hospital visits to attend to patients in need of palliative care as wells as the bereaved families.” She says

The group has also managed to make the following achievements:

It also participates in development projects and income generating activities through contributions and soliciting funds.

Mercy Kigundu, the self-help group secretary, says they have taught members on how to make fresh juice to boost the group’s income.

“We also do bead work through which the members are able to raise some income and we have a demonstration garden.” Kigundu says.

It also aims to do rehabilitation for patients after amputation and after mastectomy.