Care The race for palliative care provision still on - ehospice

The race for palliative care provision still on 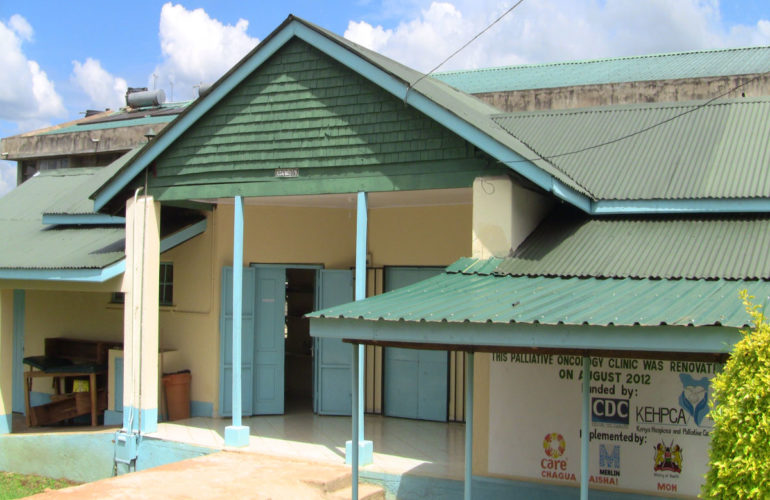 Kisii Level 5 Hospital is one of the eleven government hospitals that have integrated palliative care in its services.

“We were given an abandoned building which we have managed to renovate with funds from Kenya Hospices and Palliative Care Association (KEHPCA) as well as from Chagua Maisha.” Mrs. Lwanga says.

She says that they are planning to purchase a wheelchair and partitioning curtains with the remaining funds. With the funds, the unit has also purchased 20 plastic chairs.

Though the place is not fully furnished, Mrs. Lwanga says they are able to see patients and offer the services that they have been lacking for a long time.

KEHPCA gave a computer and a printer to the unit, which helps them in record keeping and report writing.

Over 20 health care providers received education on pain management and an overview of what palliative care entails to better palliative care service delivery at the hospital.

“When you suspect an ailment and send a patient for specimen for tests, this is the right time to inform the patient what you suspect so that the patient starts preparing psychologically for the outcome of the results.” She says.

In this way, Mrs. Lwanga says, the health care provider will have it easy revealing the outcome of the results, which could be difficult if the patient had no idea of the reason behind the tests.

“Once the results are out, the doctor will send a patient to a nurse who will also in turn avoid telling this patient the outcome, but choose to find an excuse and refer the same patient to another health care provider. It has been a channel of evading disclosure.” Dr Kinyanjui says.

This, Dr Kinyanjui says, leaves the patients with psychological torture, trying to figure out what this ailment is that none of the doctors or nurses is willing to inform them.

“If your patient tests positive for the HIV virus and does not want such information to be disclosed to any other person, would you pass this information to the wife?”

One health care provider said that disclosure is a dilemma in counseling and urged them to consult, as such matters are sensitive to avoid finding themselves in a tussle.

The palliative care unit at Kisii Level 5 Hospital is in the forefront of ensuring patients are free of pain.

“At the unit we give 100ml of oral morphine to patients at a price of KES 500. This is able to last them for a maximum of three weeks depending of the level of their dosage. Those who cannot afford this amount, we give some dosage and ask them to find money as we look for ways of making it more affordable to the majority.” She says.

Currently, Mrs. Lwanga says, they have limited bill exemptions at the hospital meaning they can only offer such exemptions in extreme conditions to avoid biting into the hospital budget.

She says that they are planning to set a budget for purchase of morphine from Kisumu Hospice, their mentor.

The nurse in charge says in the near future they intend to transform the unit into a hospice so that they can reach a wider margin of patients and be able to comfortably offer home based care through home visits.

She added that human resource remains a challenge as she is the only designated nurse at the unit and most times, she is overwhelmed by the workload.

She thanked KEHPCA for the insightful pain management training spearheaded by the association’s coordinator for pain relief, Dr Esther Muinga, adding that many myths that have been holding back health care providers from prescribing morphine were tackled.

The unit has seen over 300 patients since its establishment within the hospital ranging from those ailing from Kaposi’s sarcoma to those with prostate cancer among other life limiting illnesses.