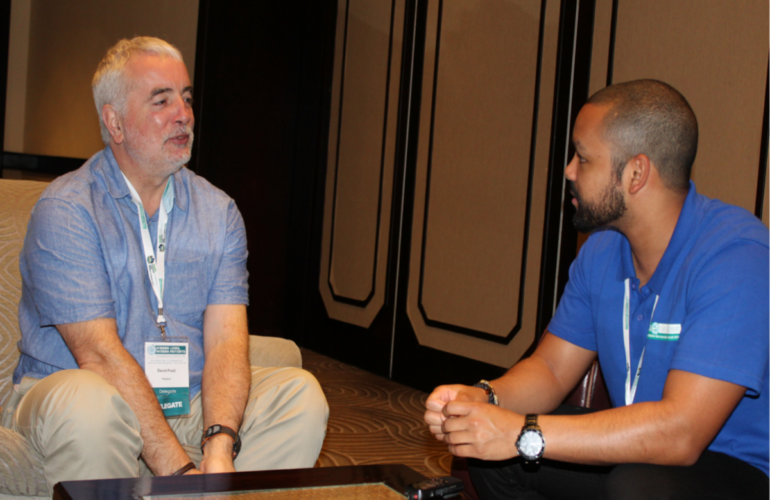 David was at the forefront of the ehospice concept, and it was interesting to hear about the time when he realised that he needed to make his vision about ehospice a reality. When the iPad was launched, he got his hands on one, and one of the first ‘apps’ he downloaded was the Times newspaper. At that stage it was one of the very first newspaper applications out there, there being at that stage fewer than 20.

When he downloaded the application, opened it, and found the convenience of the news appearing before him on his iPad, he found it so intriguing and was left thinking that organisations spend a lot of their time trying to get traffic to their websites to get information, sending out newsletters and so forth.  However, times are changing and it was at that moment that he realised that the way in which we access news is changing and changing for the good.

“We have got to move from being an information service, to actually providing real news for people in a way that is compelling and keeps people in touch with what is happening in their field around the world.” he said.

This whole concept was a very interesting process because it entailed a mind shift from being an information provider to being a news provider. Some organisations got it, some did not, but what was great was that many organisations around the world embraced it, such as South Africa, Canada and America who immediately wanted to invest in the concept.

An exciting group of people around the world got together with the common goal of sharing the good practices of hospices and people all around the world. For example, if you are struggling to provide care to someone with dementia, or you are wondering how to start palliative care in prisons, you can access ehospice, search for what you are interested in and find articles from all around the world which are there to help people learn, improve care and of course keep in touch wherever you are.

David recalled when he fully realised the impact of ehospice, about two years ago. He was attending an HPCA Conference and a lady came up to him and thanked him tremendously for ehospice, because she was based in rural North West of South Africa and felt very alone and isolated. However now with ehospice she is able to read articles from people all around the world and gather information that she can put into practise in her own hospice. She said it has been a fantastic help!

David has attended numerous HPCA Conferences and he mentioned that what he really enjoyed about this year’s conference has been the networking he has been able to do, the number of new and old faces he has met up with and lastly the great tracks and workshops that he has attended. Even though he has over 19 years’ experience in the field of hospice and palliative care, to this day he still learns a great deal, he said, and is amazed by the impact that the field of palliative care is making around the world.

He is equally amazed by the great knowledge people have in the field and how they are able to present it at conferences such as the annual HPCA one. The conversations with people he met at this year’s conference have been a great highlight for David as well, because they help to form and build a professional relationship into a friendship. If ever that person you have met needs help or assistance or is a bit under pressure, they will know they have someone who can help and support them.

David loved the HPCA Conference and he applauds everyone who has been involved in managing it and making sure it was a success. He looks forward to attending many more conferences in the future.

If you would like to find out more about Hospice UK visit: www.hospiceuk.org