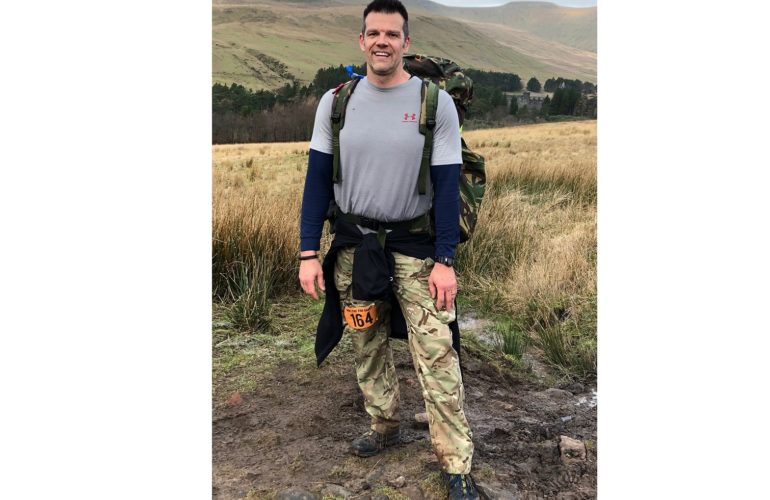 A man from Northampton is taking on a series of extreme endurance challenges in memory of his father and the outstanding hospice care he received from St Barnabas House.

Andrzej Zyms’ first major fundraising was the National Three Peaks Challenge in October 2018, which saw him climbing the three highest peaks of Scotland, England and Wales in the space of 24 hours.

He is celebrating after completing his second challenge, the Fan-Dance, on 6 January. This challenge is a gruelling 24.8km SAS selection weight bearing test march staged over Pen-Y-Fan, the highest mountain in the Brecon Beacons. It is used as the first major indicator of whether a candidate has the physical and mental aptitude to complete the legendary selection course.

Speaking about taking on the challenges, Andrzej says:

“I thought that the Three Peaks was hard, but that was nothing compared to the Fan Dance. I think I can safely say that it is, physically and mentally, the hardest thing I have done.

“I went with the expectation of finishing within the 7 hour time limit – the SAS hopefuls have to complete it in less than 4 hours. In the end, I finished in 5 hours 1 minute and 4 seconds.

“I wore my heart rate monitor and I was operating at over 90 per cent of my maximum heart rate for 2 hours 15 minutes and the rest of the time I was sitting somewhere between 80 and 90 per cent. I was in tatters by the end and had burnt a total of 6,200 calories.”

He is now preparing for his biggest challenge of all – Everest Basecamp – departing from Lukla, Nepal on 11 May.

The series of endurance challenges are all raising money to support the work of St Barnabas House who cared for his father, Wojciech, during the later stages of his battle with cancer in 2012. Wojciech and his family received care and support from the Hospice at Home Team.

“Had it not been for St Barnabas, dad may have had to spend his final weeks in a random, bleak hospital room. Heading for the unknown, surrounded by the unknown.

“St Barnabas arranged for him to have a hospital bed installed in the living room and all the other bits and bobs he needed to be comfortable.

“Nurses came in twice a day to care for him. It was difficult to watch and see. The man that was always my rock, the one I looked up to, was now pretty much helpless and incoherent a lot of the time due to the amount of morphine he needed just to keep the pain at a manageable level.

“I was able to spend time at dad’s bedside, at his home, surrounded by the people and things he knew and loved. All this was made possible by the Hospice at Home service, which is why I am raising money to help St Barnabas House do for many more what they did for my dad.”