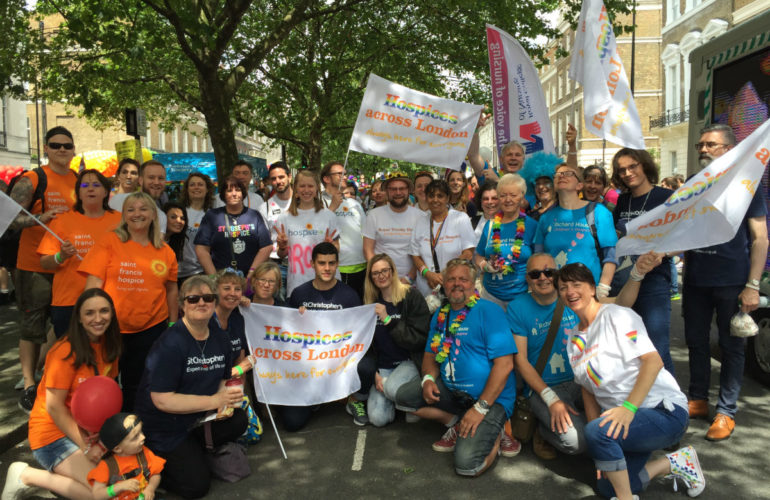 Around 60 staff, volunteers and supporters took part in the march through the West End of London to spread the message that hospices are here for everyone.

Royal Trinity Hospice was the first hospice to march in the parade in 2014 and this year invited others from the sector to get involved too.

Those taking part waved ‘Hospices Across London’ flags and handed our branded wristbands, receiving a warm welcome from the crowd. Many of those marching brought friends, partners and children – the youngest of whom was only two.

Dallas Pounds, chief executive of Royal Trinity Hospice, said: “By marching in the parade, we hope to send a strong and clear message that hospices are here for everyone, whatever their background or community, whenever you need us.

“We also aim to show that hospices are inclusive and accepting environments for people from LGBT communities who wish to work for us.

“The unanimous feedback from everyone taking part has been hugely positive, and the response from the crowd unbelievable. It’s safe to say it’s been the best pride yet, and we look forward to attending next year!”

Pride provides a platform for every part of London’s LGBT+ community (lesbian, gay, bisexual, trans*) to raise awareness of LGBT+ issues and campaign for the freedoms that will allow people from the LGBT+ communities to live life on a genuinely equal footing. The Pride campaign this year was #NoFilter which encourages everyone to live as themselves and celebrate authenticity.