Hospices recognised for innovation in nursing and education by national awards 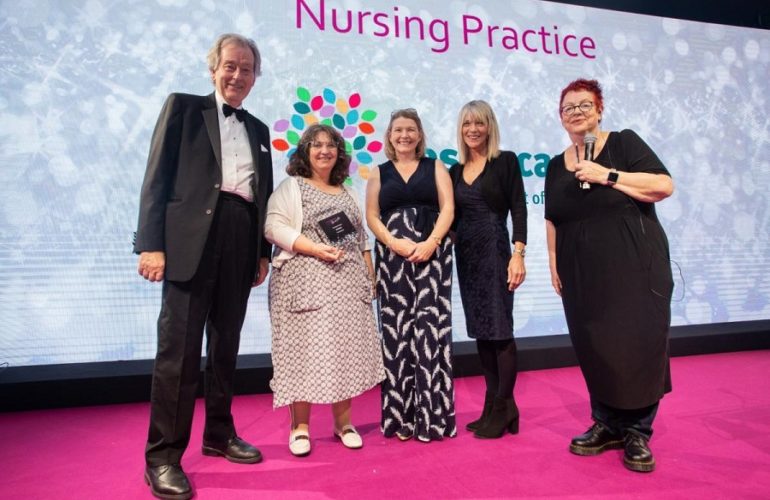 The Hospiscare team receiving their award from comedienne Jo Brand. Photo by LangBuisson

Hospiscare in Devon has received a national award for Excellence in Nursing, while Springhill Hospice in Rochdale has been nominated for an award for Most Innovative Endorsed Learning Provider.

Hospiscare received the LaingBuisson Award for Excellence in Nursing for their Heart2Heart Programme, in partnership with the Royal Devon & Exeter NHS Foundation Trust. The Programme supports people in Exeter, Mid and East Devon living with heart failure and helps them make the most of every day.

Also known as “the Oscars of health and social care”, the LaingBuisson Awards celebrate best practice in the health sector. The Excellence in Nursing award recognises “Excellence in the delivery of nursing services with a focus on innovation, patient management and engagement in the acute or mental health hospital setting across both the NHS and Independent Hospital Providers.”

The hospice beat over 375 nominations to become finalists, and received the award at a ceremony at London’s Park Plaza Westminster Bridge. The event was hosted by comedienne Jo Brand, herself a former psychiatric nurse.

“Winning this prestigious award is very special. Hospiscare is a local charity and this award values and celebrates our expertise and spirit of partnership, through our Heart2Heart work.

“Bringing together the experts in end of life care with experts in cardiology and heart disease has been made all the more powerful by working alongside patients and families who are experts themselves.

“We had some significant competition in our category, so this award, which celebrates excellence in nursing, is something our teams here at the charity are very proud of.”

Meanwhile Springhill Hospice has reached the final of the Skills for Care Accolades for its free palliative and end of life care educational programme available to all health and social care staff in the local area.

The hospice began delivering this programme in 2016, when 31 healthcare professionals took part. The number of participants has grown steadily since, and in October this year 88 people completed the course.

The Accolades recognise care organisations’ investment in workforces. Springhill’s education team will find out if they have won at a ceremony in London on 22 January 2020.