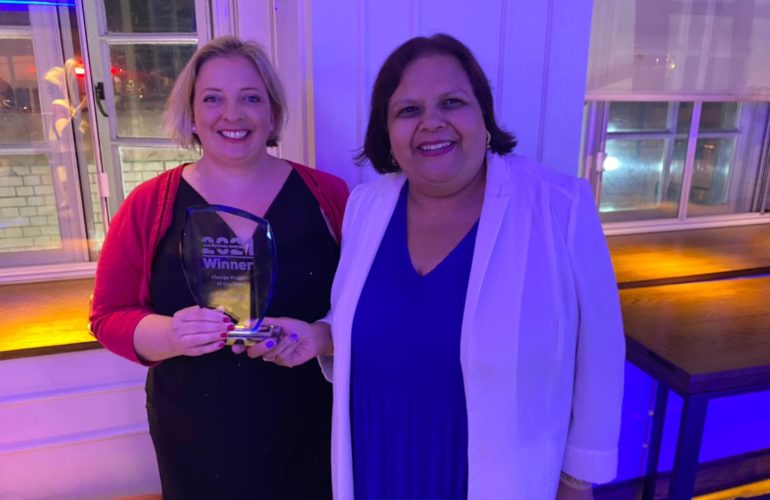 The West Essex and East Hertfordshire charity, St Clare Hospice, has been recognised for its bereavement services’ response to the pandemic with an award for ‘Change Project of the Year’ in the national Charity Times awards, which took place on Thursday 9th September.

St Clare Hospice rapidly changed its approach to delivering bereavement support to local people in response to the lockdown restrictions in March 2020, to ensure that those facing loss during the pandemic were not socially isolated during their grief.

The Hospice adapted its Bereavement Café model from a face-to-face support service, to a social media and video conferencing based service, within a matter of weeks – establishing six Facebook-based support groups with approximately 200 bereaved adults and young people.

The Hospice also launched a Bereavement Support Helpline in June 2020 to provide emotional support and practical support, in addition to sign-posting to other services, for local people.

The Listening Ear service was added to the Bereavement Support service in October 2020, accessible via the Bereavement Support Helpline. This service offers sustained support, usually over a period of 6-8 weeks, via a weekly telephone call from a trained volunteer. This service has been valuable for those who are unable to access online and virtual bereavement support – often those who are older and isolated.

Sushma Dhami, Patient and Family Support services Manager and Sally Muylders, Community Engagement and Involvement Manager, accepted the award for St Clare Hospice. Both were instrumental in the redesign and delivery of the Hospice’s Bereavement Support services.

Sushma commented: “Our vision at St Clare Hospice is that people should live well and also die well, with help and support for those who are bereaved.

“It is due to the incredible dedication and hard work of our staff and volunteers, and testament to the vision of our Chief Executive, Directors and Board of Trustees, that we were able to launch our Bereavement Support Helpline, Listening Ear service and Bereavement cafés for online communities in the midst of a global pandemic.”

The Hospice has seen a 52% increase on referrals to its bereavement services since the start of the pandemic, demonstrating the local need for bereavement support in West Essex and East Hertfordshire.

Sushma added:  “The changes to our Bereavement Support services have helped us to reach more people at a time when it was most needed; West Essex has one of the highest death rates from COVID in the UK.

“This award win seems all the more poignant because of the heartache that COVID has caused. It makes me very proud that we have found a way to support people in our local community through such a challenging time.”

St Clare Hospice now provides immediate Bereavement Support to anyone who needs it, via the Bereavement Support Helpline, 01279 967670. People are able to develop their own support networks through the Hospice’s Bereavement Cafes, which are still being delivered online in addition to taking place on a weekly basis at the Hospice, and on a monthly basis in Great Dunmow and Harlow.

The award ceremony, which was organised by Charity Times magazine, celebrated excellence and best practice within the charity sector.

Photo: L-R Sally Muylders and Sushma Dhami at the Charity Times award ceremony, having won the Change Project of the Year award.

Find out more about how St Clare Hospice’s Bereavement Support services are helping local people through reading summaries of their experiences:

St Clare Hospice is a charity providing specialist palliative care for people living with terminal or life-limiting illnesses across West Essex and East Herts border. We care for patients and their families, providing physical, emotional, social, psychological and spiritual support, and ensuring they have timely access to skilled, compassionate and sensitive care in a place of their choice. Our services are free of charge to those who need our care, but cost around £5 million a year to run. With limited NHS funding we need to fundraise the majority of this each year through donations and other voluntary sources.