London Marathon runners inspired by memory of their loved ones 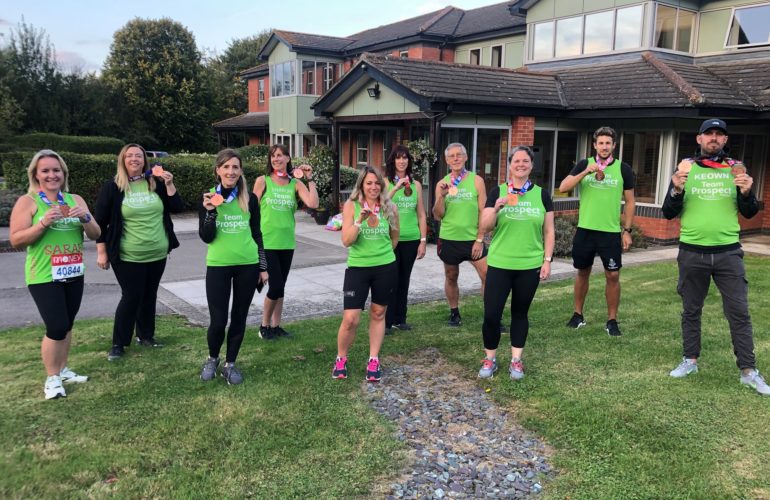 Supporters of Prospect Hospice have raised more than £15,000 for the charity by running the London Marathon. Many of those running in the capital on Sunday 3 October did so in memory of loved ones who were cared for by Prospect Hospice. 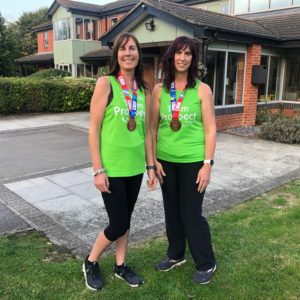 They dedicated each of the 26 miles of the race as ‘memory miles’ to loved ones of themselves, family and friends. Their names were on the back of Sharon’s running vest and written on Amy’s arms.

Sharon, 49, a teacher at Lydiard Millicent Primary School, said: “It was nice to run for Prospect Hospice to give something back for the care they gave to both my dad and father-in-law and to ensure the hospice can continue to help others.

“Towards the end of the London Marathon everything hurt and the final mile was dedicated to my dad so I dug deep.”

Amy, 42, a teacher at Oakhurst Primary School, Swindon, said: “It became very emotional as we ran thinking of the people we were dedicating each mile to, but it’s been lovely to raise funds for the hospice.” 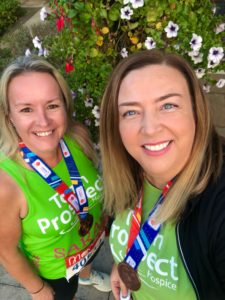 Sarah, 48, a clinical nurse specialist, was running in memory of her father, Tim Keeler, and it was her first marathon. She had a nasty cold in the week prior to the marathon and on the morning of it her sinuses were still congested.

She said: “It was tough at certain points, but I did far better than I was expecting and I was over the moon to complete it in 5:59:35.”

Dorinda, 42, a specialist physiotherapist who works with patients with neuro-respiratory conditions and frailty, suffered an ankle injury in a training session prior to the marathon.

At the eighth mile of the race she had her ankle strapped up by St John Ambulance volunteers and carried on to the end.

She said: “I was unsure I would even get to the start line of the London Marathon, let alone finish it. I was thinking of our patients who are dealing with pain every single day and my pain was temporary and I just worked through it. It was a huge challenge but thanks to the support of the crowd, fellow runners and sheer grit and determination, I did it.”

Some of the other runners who ran for Prospect Hospice included;

Andre Morrison, of Cirencester, who ran it in to co-incide with his 60th birthday and in memory of former colleague and friend Jay Hooke, of Swindon, who died of cancer in December 2019 aged 53. They both worked at Zurich in Swindon and Andre, a retired accountant, was running for the Zurich Community Trust and Prospect Hospice.

Jamie Richards, 31, of Swindon and a PE teacher at Royal Wootton Bassett Academy, ran in memory of his grandfather who was cared for by Prospect Hospice at home.

Sam Jenks, 40, an accountant of Swindon, ran in memory of her mother, Francine Hull, who was cared for at Prospect Hospice and died in 2000, aged 52.

Lee McKeown, 42, a civil engineer, of Pinehurst, Swindon, ran in memory of his mother, Pauline McKeown, who died at Prospect Hospice on 26 January 2014.

A total of 13 people ran the London Marathon for Prospect Hospice and, so far, they have raised £15,100 with more on the way.

Sheryl Crouch, head of income at Prospect Hospice, said: “We’re so proud of our London Marathon runners and we’d like to thank them for their tremendous efforts. Several of them had to overcome illness and injury to complete the race and we have so much admiration for them.

“Many of our runners had a personal connection to the hospice with family members cared for by it and this provided huge motivation to spur them on when they needed it most. As people remember their loved ones, supported by the crowd and the electric atmosphere, the London Marathon can be an emotional but incredibly rewarding experience.

“As well as receiving a well-deserved London Marathon medal, the funds raised by our runners will enable the hospice to provide specialist care to patients who are terminally ill and offer support to their families.”

*If you are interested in running next year’s London Marathon on 2 October 2022 for Prospect Hospice, please contact the fundraising team by email on fundraisingandevents@prospect-hospice.net or call 01793 816161.

Prospect Hospice is a charity providing end-of-life care to people 24 hours a day, seven days a week. It does this through its inpatient unit at the hospice in Wroughton, Swindon, day therapy and in people’s homes and all of its services are offered free of charge to all those who need it.  Our specialist teams provide clinical, emotional and practical support to patients and their families. Prospect Hospice began in 1980 and serves a community of more than 300,000 people in Swindon and north east Wiltshire, including Royal Wootton Bassett, Marlborough and Pewsey, plus Lechlade and Fairford in Gloucestershire. It costs £7.5million to run our services and around 70% is funded by generous donations by the community.