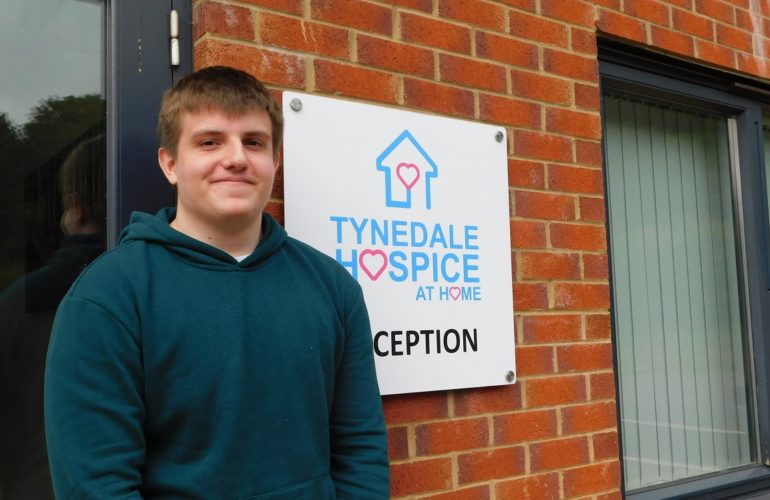 James Bacon experienced the death of his mum in 2018 and found support through the Family Support Team at Tynedale Hospice at Home. A growing love of film and media inspired him to study TV and Film at Gateshead College, and when tasked with creating his end of year film project, he decided to explore grief and loss in a documentary.

“It was a very personal experience” he said. “Last year I lost my mum. I realised that grief is not spoken about publically and I felt that this topic should be looked into.”

Part of the preparations for making the documentary included conducting a survey to gather views and public perceptions about grief. “I had over seventy respondents to my survey and they all said that this was a very emotional topic, and that films and documentaries focus almost exclusively on the emotions. I wanted to look from different angles, yes the emotions because they are there and they are real, but also the theories about grief and grieving” explained James. He went on to undertake secondary research into bereavement theory to deepen his understanding.

Both Emma Andrews and Val Jewitt feature in the film, talking about experiences of grief and developments in bereavement theory. Also featured in the documentary is James’ brother David. “He was really willing to take part,” explained James, “his comments are very honest and the emotions still raw – it’s really hard to talk like that in front of a camera, when I did my piece I needed to do about twenty takes!”

James spoke positively of the support he had received. “It was really beneficial, really good for me. It helped me find a way to voice what I was feeling. The other person acted almost like a mirror, so I could process and work through my own grief in my own way.”

James’s documentary film won ‘Best Film of the Year’ in his year at the Gateshead College award ceremony. He is keen to pursue a career in film and TV, particularly exploring documentary making and the power documentaries can have to make a difference. The topic of grief may be one he revisits, he’s said.

Tynedale Hospice at Home have a copy of the film so they can share it with other beneficiaries of the Family Support Service, adults, children and families dealing with the loss of a loved one.

Emma Andrews, Family Support Practitioner said, “James’s award-winning film is already proving to be a fantastic resource in our work with bereaved families here at the hospice. He clearly depicts not only the support we offer but the impact our work can have. James’s insightful film provides a wonderful introduction to our work and we are so grateful to him for allowing us to use it.”