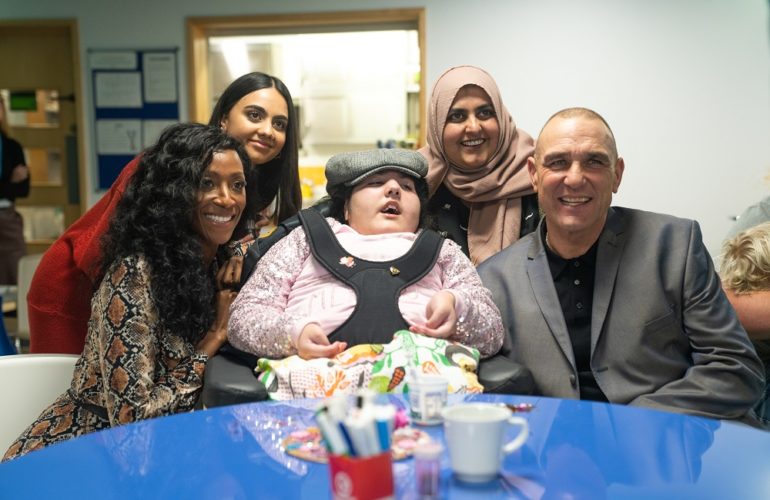 A charity single featuring all the stars of The X Factor Celebrity will give all its profits jointly to Shooting Star Children’s Hospices in Surrey and national charity Together for Short Lives.

The single, a cover of Snow Patrol’s Run, features the show’s winner Megan McKenna as well as the three other finalists Jenny Ryan, Max and Harvey and girl group V5.

Children and families supported by Shooting Star Children’s Hospices had the chance to meet the celebrities when they filmed part of the music video for the single at Shooting Star House, the charity’s Hampton hospice. The celebrities got involved in Christmas-inspired arts and crafts, chatted to families and took time to pose for pictures.

Karen Sugarman, Executive Vice-President at Shooting Star Children’s Hospices said: “We are so proud to be joint beneficiary of The X Factor Celebrity 2019 charity single. It was fantastic to welcome all the celebrities to our West London hospice to meet the children, young people and their families.

“It was the most special day with one little girl saying it was the best day of her life. I would like to take this opportunity to thank my co Vice-President Simon Cowell and all at The X Factor Celebrity and Syco Entertainment for their incredible support. We are so privileged to have the opportunity to highlight the vital care that Shooting Star Children’s Hospices provides at Christmas and throughout the year.”

The single can be downloaded via Itunes, Amazon, Google Play and Apple Music. Simco Limited will donate 100% of its profits from the sale of each download and in respect of all audio streaming of the single to be shared equally by Shooting Star Children’s Hospices and Together For Short Lives.

The X Factor single can be downloaded here