CarePeople & Places This is who it takes: the shop manager - ehospice

This is who it takes: the shop manager 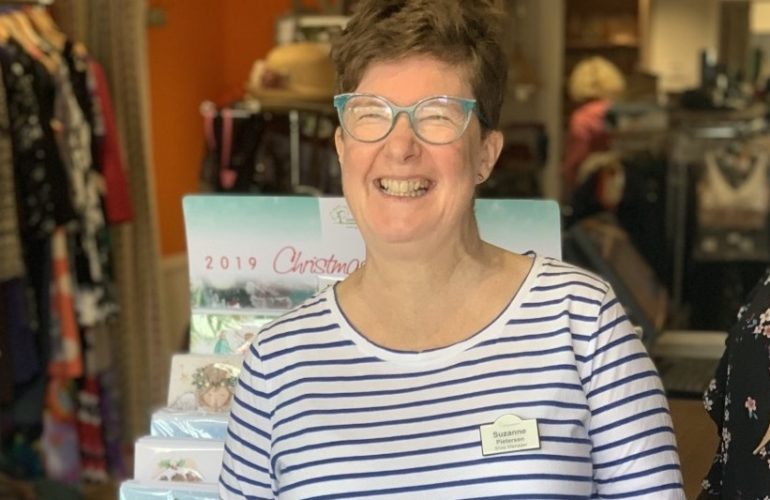 In the latest instalment of our Hospice Care Week miniseries celebrating the variety of individuals and roles it takes to deliver vital end of life care, Suzanne Pietersen tells us why she loves managing a charity shop for Arthur Rank Hospice that’s a beloved part of the community in rural Cambridge.

Day-to-day in the shop you can expect one thing to happen and then something completely different happens. Normally I come in, set up my till, set up my computer at the back, and get ready for the day and the volunteers, but honestly, by the time I reach my desk I’ve already bought three things! That’s what it’s like working here – we work part time on a rota and things are replenished while I’m off.

The most popular items are toys and ladies’ tops – tops are easier to buy than trousers and skirts. And then if we can get toiletries, perfume and make up that’s new, for example if they’re unwanted gifts for Christmas, they’ll run out quickly too. The most curious item we’ve had in all our charity shops has been a Noddy book in Latin. It was very old, I guess to teach children Latin.

You never know what’s going to come through the door. This morning a lady asked us to help unload her car and she had lots of pristine paperbacks and hardbacks, all of which I know will sell, as well as a little coffee table. We also got what must have been hundreds of watercolour paintings by a lady who just died and who was well-known in the village. Her in-laws brought in all of these pictures, and people will come in and buy three of them at a time for £3 or £5 each.

If we can’t sell it ourselves we’ve got four other shops to pass it on to. We get a lot of bedding and stuff that we don’t sell but we know a lady who takes the not so good stuff and turns it into shopping bags. We do a lot of reusing and recycling.

My favourite thing about working here is that it’s manic. I love it, I wouldn’t want a job where it’s quiet. We’re in a village so people drop the children off at school, then they come in with their prams, and then collect them at three and bring them in. We see the same people over and over. Somebody asked today if we got a Thomas the Tank Engine book could we save it for them. It’s not really a bespoke service, but it’s a bit more personal because we know the customer base so well. Some people who come in don’t have money to buy new items but a lot of people buy from us because they want to support the charity.

Volunteers will just drift by, and it’s quite common for someone to say they’re leaving their dog at the groomers for an hour and a half and they’ll do a shift in the meantime. One of the volunteers came in this morning and told us she’d just made a Victoria sponge but didn’t want to eat it all, so she brought us three quarters of it. People are just really nice. It’s not like a normal job really.

We have a tea party once a year for the volunteers. We hire a room at the community centre and they all come along, all 30 of them. Because of the rota they don’t see people on the other days, so it’s nice for them to all get to know each other.

I have been involved with Arthur Rank Hospice for eight years, and I have never heard anything other than high praise. If you’ve got a relative who is dying the worries are taken off you. The hospice isn’t clinical or cold, and people rave about it.

We’re not personally providing that care but I like to feel I’m making it possible by helping raise money from the items that have been given and that we make ourselves, and being part of the community, helping people.