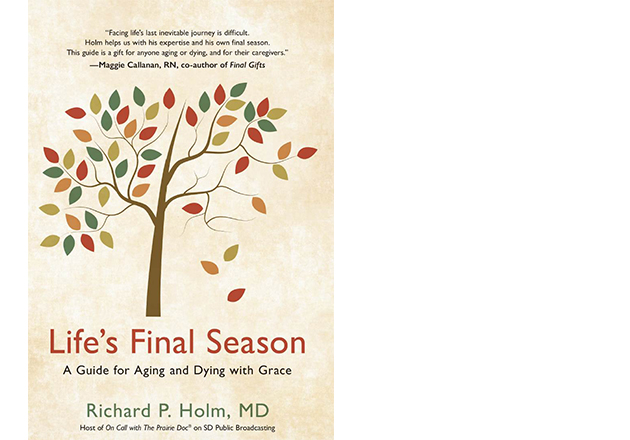 (Brookings, South Dakota; August 29, 2018) – Richard P. Holm, M.D., founder of the Prairie Doc®, today announced his new book “Life’s Final Season: A Guide for Aging and Dying” is now available on Amazon and soon will be available in select book stores located in his home state of South Dakota.

“I wrote this book for those who are aging, which means all of us,” said Holm. “This book addresses issues to help the well, the sick, those who are dying and those caring for elderly persons in the final season of their lives.”

Well into the process of writing his book, Holm at age 67, was diagnosed with cancer of the pancreas. His book tells of surviving his initial battle with the aid of chemo therapy and surgery. However, the storm is not over. The cancer returned and Holm is back on chemo, facing additional surgery this fall.

“This is one tale I never thought I would tell,” said Holm. “I was a half-marathon-running, spiritually healthy, family man. I had abundant friends, more interests and activities than I could accomplish. I was a person at minimal risk of an early death, or so I thought.”

Holm explains his book is more about living than dying, “Some chapters are written specifically to reduce the fear of death, but the intent of this book is that it be a guide to help individuals and caregivers in our quest to age and to eventually face dying with courage, grace, dignity and even enthusiasm.”

“This book is ‘sacred ground’,” said oncologist, Catholic priest and medical missionary William Fryda, M.D. “Obviously, none can speak with any experiential voice until they have actually been where Holm has been, living daily with the hope, fear, and emotional roller-coaster of this experience.”

V.J. Smith, best-selling author and speaker from Brookings, South Dakota recommends Holm’s book. “Do you want to read a book that will truly change your life? Then, read this one,” he said.

“Not just for the elderly, this book will be life-improving no matter your station in life,” said Jim Engelbrecht, M.D., rheumatologist from Rapid City, South Dakota.

A native of De Smet, South Dakota, Holm retired after practicing medicine for nearly 40 years in Brookings. He and his wife, Joanie Holm, R.N., C.N.P. have four adult children and continue to live in Brookings where they are active members of the community.

In 2017 Holm was inducted into the South Dakota Hall of Fame and cited as “South Dakota’s Voice of Healthcare.” He is founder and volunteer host of television show “On Call With the Prairie Doc®,” a weekly call-in show offering health information airing on South Dakota Public Broadcasting most Thursdays at 7:00 p.m. central time for more than 16 years.

Together with illustrator and co-author Judith Peterson, M.D., Holm authored a previous book titled “The Picture of

Health: A View from the Prairie,” published by the South Dakota Agriculture Heritage Museum in 2008.

Holm has posted dates and locations for his appearances and book availability on the Prairie Doc® Facebook page and website.