People & Places The Death of a Hospice Pioneer - ehospice

The Death of a Hospice Pioneer 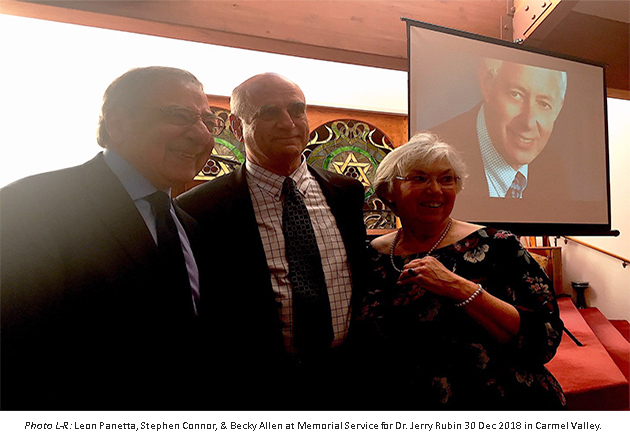 Dr. Jerry Rubin died last October. Not that Jerry Rubin of anti-Viet Nam war fame. No Jerry, his nurse Becky and I started one of the first 10 hospices in the US, the second in California. Jerome Rubin, MD was born June 29, 1944 in New York and trained in medicine at Johns Hopkins and oncology at Beth Israel in Boston. He moved to Carmel California in 1974 to begin a 44-year career. Shortly after beginning his practice he started a support group for his patients called the ‘cancer recovery project.’ At the time I was working in drug abuse treatment in Monterey and had an epiphany that as a psychologist I should instead work with cancer patients. e moved

I offered to help Jerry facilitate his cancer support group and to do volunteer work with his patients doing guided imagery, body work etc. We ran the weekly group together for many months and the patients taught us so much about what they needed. Mainly that they couldn’t talk to anyone about their hopes and fears. Becky Allen, Jerry and I met one day in 1975 to talk about the recovery project. Almost all the patients were dying, and it seemed to us that they needed help more with that than with recovery from their cancer. We had just heard about hospice in the UK and we decided then and there to start a hospice. I quit my job at the counseling center and Jerry gave me an office to work out of. Over the next three years we built Hospice of the Monterey Peninsula (now Hospice of the Central Coast) from scratch.

The hospice succeeded and had a 6-bed inpatient center in Carmel Valley (later moved to Monterey). I moved on to start Hospice of San Francisco but Jerry persevered as medical director and was one of the main people who pushed Monterey representative Leon Panetta to introduce the Medicare Hospice Benefit in Congress along with Bob Dole in the Senate in 1982. Mr. Panetta spoke at his memorial service in Carmel Valley in December and described clearly how much Jerry had influenced him to introduce the legislation.

There are many unsung heroes in the US hospice movement, and few knew of Jerry’s role in the success of hospice in the US and the millions of people whose lives and deaths were improved due to these efforts. Jerry was always a soft-spoken leader who wouldn’t have wanted to take credit for anything but as Leon Panetta noted he was an important part of the story and deserves credit. Jerry died of cancer October 16th and is survived by his wife Suellen and two daughters. Becky lives in Washington on Bainbridge Island and still practices nursing. Hospice of the Central Coast is now part of Community Hospital of the Monterey Peninsula. The Hospice Giving Foundation continues to support hospice and palliative care in Monterey County.