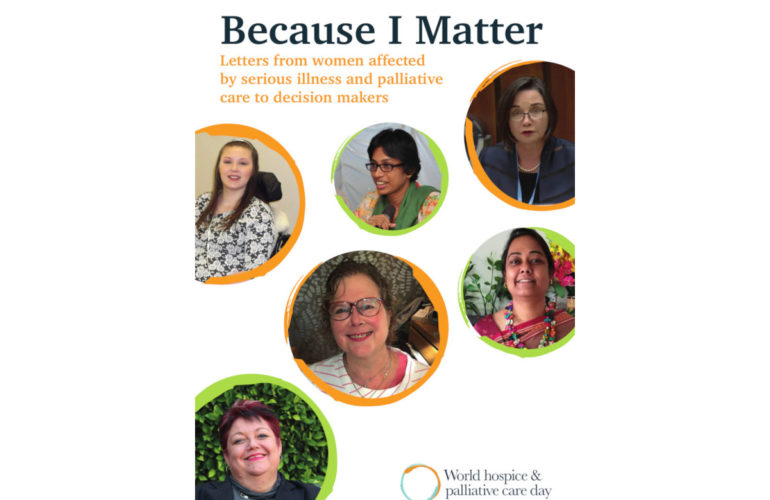 The report contains the open letters of six extraordinary women from Australia, Bangladesh, India, South Africa and the UK to decision makers who can influence access to palliative care.

They aim to encourage greater understanding of and commitment to ending avoidable suffering and making palliative care available for all as part of the move towards Universal Health Coverage.

Included in the report is a letter from ICPCN’s Global Youth Ambassador, Lucy Watts MBE, to Dr Tedros, Director General of the World Health Organization who writes, “Yet, like many areas, palliative care development is not getting the resources it needs either from national government health budgets, donor governments or international agencies. I hope in my lifetime to see that change happen especially given the evidence we now have from the Lancet Commission on Palliative Care and Pain Relief that an essential package of palliative care costs just $3 per capita in low and middle income countries. It is a moral imperative to stop avoidable suffering.”

In her letter to Mr Mohammed Nasim, Hon Minister of Health and Family Welfare in Bangladesh, Shayema Shafiz Sumy writes, “I lost my three year old son to cancer after witnessing his immense suffering for 8 months. My son, Ayman, was born on 19th April, 2012 and left us on 3rd January, 2016. Although he is no longer with us, we are continuously reminded of the pain and suffering he went through. Now, long after losing my son and after meeting many other families and children with experience of this journey of suffering, we know that even though we could not cure him, we could have alleviated much of his, and our, suffering if we had access to palliative care for children in Bangladesh.”

61.5 million people worldwide experience serious health-related suffering which could be addressed by palliative care. Unfortunately, less than 10% of those that need palliative care can access it and 42% of the world’s countries have no palliative care services at all.

This is despite the fact that an essential package of palliative care in low- and middle-income countries costs about $3 per capita.

As countries move towards Universal Health Coverage, the voices of those affected by serious illness must be heard to ensure equitable coverage of palliative care for those who need it.