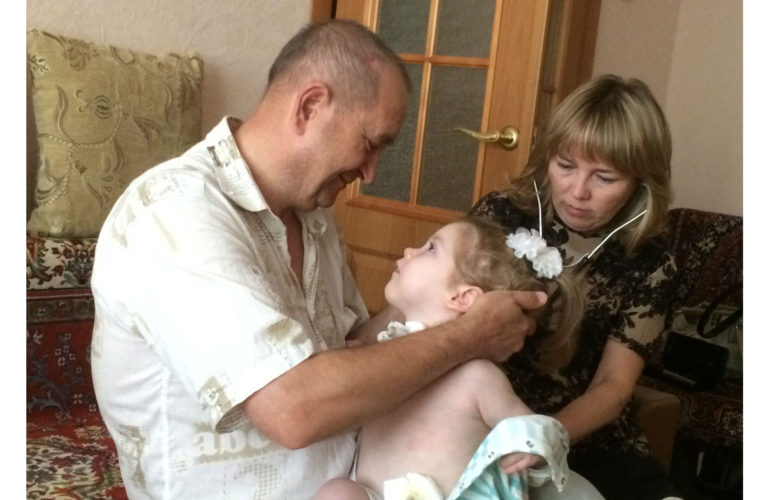 It is always very special for me, as a hospice volunteer, to accompany teams on home visits, particularly paediatric teams. Home visits are usually full of smiles, laughter, encouragement and, of course, focused clinical attention on the sick baby or child and her caregivers.

My experience with Dascha and her grandfather Alexei was more than usually special though. I felt I was in the presence of pure, undistilled Love, the like of which we are rarely privileged to experience. Dascha is two and a half, and has a variety of cerebral palsy, although her paediatrician thinks they might have missed a congenital anomaly in the workup. Dascha can’t swallow, and has to be aspirated every hour, having extremely minimal functionality. When her grandpa holds her and strokes her face and hair and smiles – or rather beams – into her eyes, though, you see her shine. Asked about his devotion to her, he said he spent his whole life – first as an army officer, then as an engineer, and then as an accountant – preparing for this caregiving labour of love.

His daughter, Dascha’s mom, works full time to support the family, and her dad is not present. Grandma is a retired engineer who made sure we had delicious coffee, snacks and fruit tea during our visit, taking care of everyone!

Dasha’s case illustrates the wrap-around nature of BCH’s services: when she was discharged from the hospital after two and a half months as an inpatient (with grandpa at her side), she spent ten days at the BCH inpatient facility in one of the three private rooms. Over those ten days, staff taught grandpa how to take care of Dascha at home, and she has been home ever since. Just as the team was leaving the apartment, Alexei said: “I wish I could give her my brain, through some sort of transplant… I would gladly do that.” I said: “You have given her your heart,” and he replied sadly: “That’s not enough. It won’t help her develop normally, as she should.” I replied: “It’s enough; it’s always enough.” The most important thing is that she is loved, and is supported by the Belarus Children’s Hospice team, whether or not she develops ‘normally’. And loved she is.

The woman behind BCH, Dr Anna Garchakova, a Russian born psychologist, founded BCH in October 1994 as a private charity. The Republican Children’s Onco-Haematological Centre (RCOC), had sent her to Washington DC to intern at Children’s Hospice International with Dr Ann Armstrong Dailey. The rest, as they say, is history.  Anna, a force of nature like many hospice founders, started BCH to support the most seriously ill children and families who wanted to remain at home, rather than die in the hospital – where, for lack of homecare, most were sent.

Today, BCH is one of the most celebrated and unique civil society organisations in Belarus, funded by international grants, and individual and corporate donations. BCH credits the Concluding Recommendations on Belarus of the Committee on the Rights of the Child, with raising awareness in the government sector about their obligation to expand services. Since that key human rights report, BCH’s advocacy and grant-writing strategy has been based on this primary reference of the international human rights framework. BCH’s human rights mission is to protect the vulnerable population of sick children from over-medicalization on the one hand, and from neglect and outright abuse on the other. This requires a tremendous amount of education and sophisticated advocacy. BCH has many international partners, such as Children’s Hospice UK.

According to Dr Garchakova, the root of the human rights problem regarding paediatric palliative care in Belarus is not necessarily bad intentions on the part of the government, but cultural ‘inertia’, outdated regulations, and lack of knowledge regarding the needs (and human rights) of sick children and their families. Over-stretched clinical staff at the hospice, like so many of their counterparts around the world, are struggling to produce baseline research on demographics and costing to inform government policy. One of the BCH doctors who has done the maths calculates that it costs eight times less to keep children on oxygen at home (both children in the home visits we did were on ventilators) than in the hospital, where the government is the payer. BCH operating funds and homecare are supported by grants from UNICEF and the European Commission, or private sponsors.

As of now, since there is no government funding mechanism for home care, BCH employs two full-time fundraisers who are currently applying for at least two grants: one for a palliative rehabilitation project for children not covered by the rehab system (for kids expected to recover); and the other to develop a human rights education program that focuses directly on informing families about their rights, and local and units of government about their obligations, under Convention on the Rights of the Child.

BCH teams comprise a doctor, nurse and social worker or psychologist. If necessary, a healthcare aide and a priest also visit the family. There are several hundred volunteers who assist the hospice employees, staff summer camps and daycare centres, and meet, greet and chaperone foreign guests such as myself. The core staff of thirty, with eleven employees in the social health department working on contract, is about to expand though, as the hospice will move into a beautiful new facility with ten inpatient rooms, a flat for parents, a ‘Rainbow Room’, chapel and educational centre for visiting clinical teams from the other post-Soviet republics.

Presentation: Children’s Palliative Care in Belarus (Note – Since this presentation, Belarus has oral morphine and the requisite preparations for children’s pain relief. However, supplies are not consistent.)