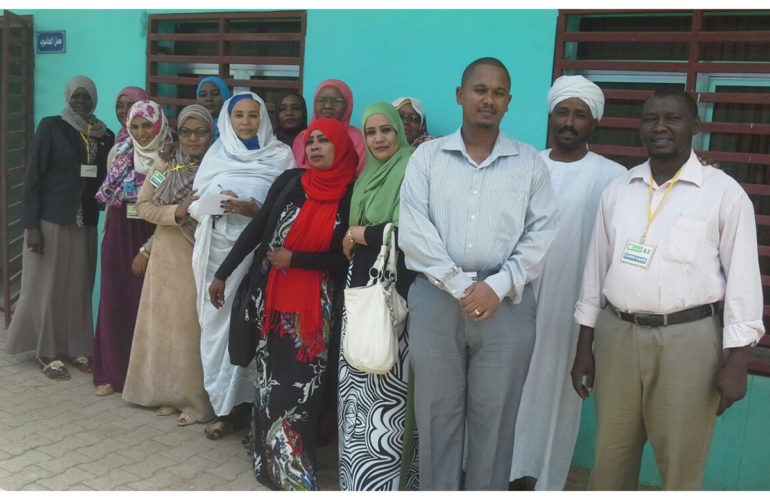 The trainers were Dr Mohja Khairalla and Adam Elfaki – both trained at Hospice Africa Uganda (HAU), Sr Halima Ali and Dr Mohamed Mahjoub – from Medani (midway from Khartoum and Gedarif) – both trained at WHO palliative care trainers’ workshop in Kuwait, and myself.

The climate was pleasant, about 10° less than the burning 37°C of Khartoum. The ride was tedious, interrupted by several bumps rendering our bus handicapped and so we trailed the last miles slowly in the dark. We arrived within eight hours instead of the expected six.

The reason for our visit was an invitation to teach palliative care from Dr Mutassim Mursi, head of the newly formed oncology centre – the East Oncology Centre – part of the Gedarif Teaching hospital. 29 doctors, eight nurses, five pharmacists, two social workers and five psychologists attended the two-day training sessions. We had to compact our two-hour session into one hour each. We are using the HAU syllabus which we had used before for teaching.

Dr Mutassim is one of a few registrars of oncology who spent a period of months volunteering at the palliative care unit at RICK, and seeing its effects. He insisted on starting the oncology centre at Gedarif with chemotherapy administration and a palliative care team.

The impact was huge, and the benefit was great. Most of the doctors are working more than 1.5 hours drive outside Gedarif, in catchment hospitals.

They mentioned that after the training, they now know what to do with cancer patients. Such patients can be cut off main roads (due to rains) for more than three months in a row.

Also, most of these patients have very low income, and often present in very advanced stages. I am using the word ‘very’ because in the capital, I believe 75% of the patients present with stages III or IV of cancer; meanwhile here I believe it is 90% presenting with stages IV – mainly due to health illiteracy and lack of services.

One of the patients we saw at the end of the first day was a 38 year old lady who was propped up in bed, because she could not lie down. She was in such severe pain, she could not even breathe.

Her sister was sitting observing her suffering with tears dropping from her eyes. She had a breast ulceration that extended all over her chest wall, and both her legs were swollen and one arm was grossly lymphedematous; she could not raise it.

That was the most suffering I saw in my life; she can hardly take a breath to moan or cry and her teeth were clenched all the time. In fact one of our trainees came out of the room crying as well.

My first impulse was to go to the pharmacy which was at the further end of the hospital – a 12 minute’s walk. A pharmacist from the trainees accompanied me.

We met the dispenser and told her we need 10 ampoules of morphine. The lady reacted “are you crazy! That is all I have for the night’s shift and it might be needed at the surgery or medicine department.”

We had a long discussion with her and telephone calls with the senior pharmacist ending in us securing four vials of 15 mg morphine injection – enough for our patient for 24 hours.

We agreed with her to prepare the solution until the hospital administration gets morphine solution or tablets, an administration that previously faced a general uproar in the whole city when once a patient was prescribed Tramadol.

How could it possibly be that making such important medications so difficult to access for our suffering patients results in less drug addiction, trafficking or crime.

I frankly do not see where these two lines meet.

Anyway, our patient’s pains were silenced in a matter of 40 minutes; it was really nice to find her sleeping when we came back.

We kept contact with the pharmacists, and she managed to get three day’s supply of morphine vials at a time. Yes, it was a very long trip for us, but it was really fruitful: the seed of palliative care was planted in Gedarif.