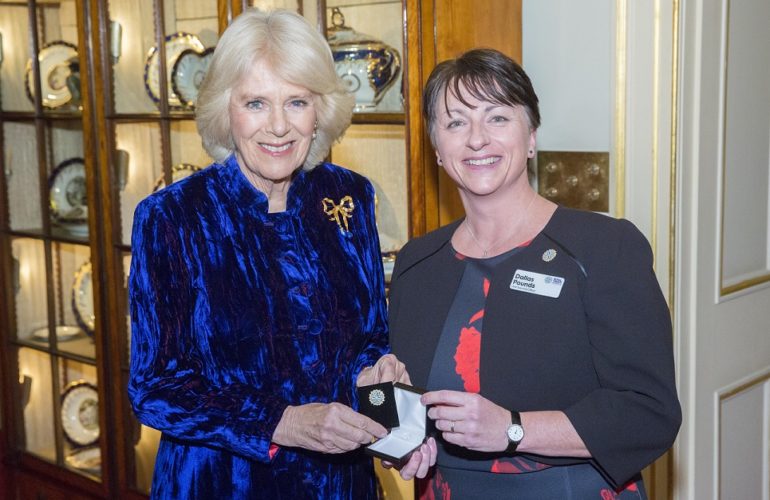 Her Royal Highness The Duchess of Cornwall hosted a reception on behalf of Royal Trinity Hospice at Clarence House earlier this week.

The Duchess of Cornwall has been Royal Patron of the charity – which is the oldest hospice in the country – for over ten years, and in that time has visited the hospice in Clapham, London on a number of occasions.

Guests at the reception included supporters of the charity, long-serving volunteers and those who have personally experienced Royal Trinity’s outstanding care.

Among the guests were Ben Harvey, who has raised over £250,000 for the hospice and children’s charity Ickle Pickles since his wife Katie died at Royal Trinity in 2017; supporters Ian and Jane McFarlane whose daughter Lisa Lynch’s book “The C-Word” was adapted into a BBC film following her death at the hospice in 2013, and patron Alexander Hoare, whose family founded what became Royal Trinity Hospice in 1891.

During the reception, Royal Trinity’s Chairman Adrian Williams thanked Her Royal Highness for her support and reflected on the hospice’s success in the last year including its innovative approaches to reaching more people and improving patient care, and its recent ‘Outstanding’ rating from the Care Quality Commission, the highest rating awarded.

“The reception was a wonderful opportunity to introduce Her Royal Highness to some of Trinity’s exceptional supporters, volunteers and champions and celebrate their contribution.

“It’s always fantastic to see Her Royal Highness and update her on all of the news from the hospice and tell her about the difference we are making to the lives of those who need our support across central and south west London.”

During the reception, Her Royal Highness was presented with an enamel pin in the shape of Royal Trinity’s new logo, which was announced last week.