In The Media Film review: Hippocratic – 18 Experiments in Gently Shaking the World - ehospice 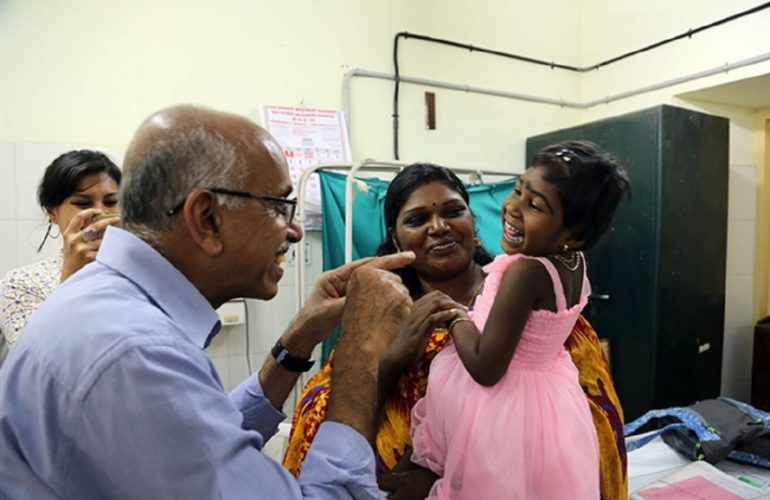 It is also a critique of the culture of modern medicine that seeks to cure disease at all cost, seeing the patient only as a container of illness, rather than a whole person with an emotional and social life.

The film guides us through 18 ‘experiments’, each using a quote from Dr Rajagopal’s hero, Mahatma Gandhi, to illustrate the importance of palliative care, and linking to Dr Raj’s decades of work to bring this compassionate, ethical medical practice to people in India.

As the narrator notes at the beginning of the film, in India: “For every 1,700 people there is one doctor – This is the story of one doctor.” Throughout the film we see Dr Raj demonstrate the courage and conviction that he so admires in his hero.

Recollections of his own personal history and childhood are interwoven with candid yet sensitive scenes of everyday life in India, as well as privileged introductions to families accessing palliative care, all set against the backdrop of India’s national history and current policy environment.

These separate narrative levels weave seamlessly together to form the film’s central argument: that modern medicine has lost its way, so much so that the Hippocratic Oath taken by every graduating medical student is seen as an idealistic formality, rather than something to be held sacred and practiced constantly.

Dr Raj was born soon after India’s independence. As he puts it: “In a time of great excitement.” He recalls how, when he was young; pain, death and suffering were part of life. He notes that, although the country has advanced in many ways, pain and suffering are still as prominent now as they were then.

A large part of Dr Raj’s mission has been to make effective pain management available to people who need it.

Like many other palliative care physicians, Dr Raj clearly remembers a traumatic experience that guided his path to palliative care. He shares his feelings of “sheer helplessness,” at being unable, as a young medical student, to ease the pain of his cousin’s cancer.

Despite India producing and exporting morphine to higher income countries, it is extremely difficult for local people to access morphine for the relief of severe pain.

‘Hippocratic’ follows Dr Raj as he travels to Delhi, to the Indian Parliament buildings and describes his tireless efforts to make sure that an amendment to the Narcotic Drugs and Psychotropic Substances Act is passed into law. This amendment, passed in 2014, recognises the importance of access to medications for pain management, as well as the current focus on prevention of diversion and misuse.

Although this amendment is a first step to easing people’s pain, there is still a long road to walk. Another barrier to patients getting appropriate pain treatment is the pharmaceutical industry and the medical culture in India.

Dr Raj says: “If we, as a society, continue to refuse to see the suffering, will we allow the greed of some nameless, faceless entities to keep on destroying people in the developing world?”

Asked by acquaintances whether he finds it depressing to work amongst death and suffering, Dr Raj says no: “This is about joy, this is about laughter, this is about happiness,” sharing special moments that he has enjoyed with people he has cared for.

Hippocratic is about getting back to the essence of medicine. As Dr Raj puts it: “Palliative care teaches us that human beings are more than containers of disease, that our aim should be – and has to be – improvement in the quality of life also, not only the quantity of life.”

The film, through Dr Raj, argues that when palliative care is integrated into the healthcare system, doctors will practice what they have taken the oath to do.

A remarkable portrait of one extraordinary man and his life’s work to ease the suffering of his fellow humans, ‘Hippocratic – 18 Experiments in Gently Shaking the World’ is a must-see. Not only for people interested in palliative care, certainly for everyone working in healthcare, but also for each of us as human beings.

‘Hippocratic – 18 Experiments in Gently Shaking the World’ was released worldwide on World Hospice and Palliative Care Day – 14 October 2017. It opens in the UK next year.

Visit the ‘Hippocratic’ film website to find out more about the film or to host a screening.