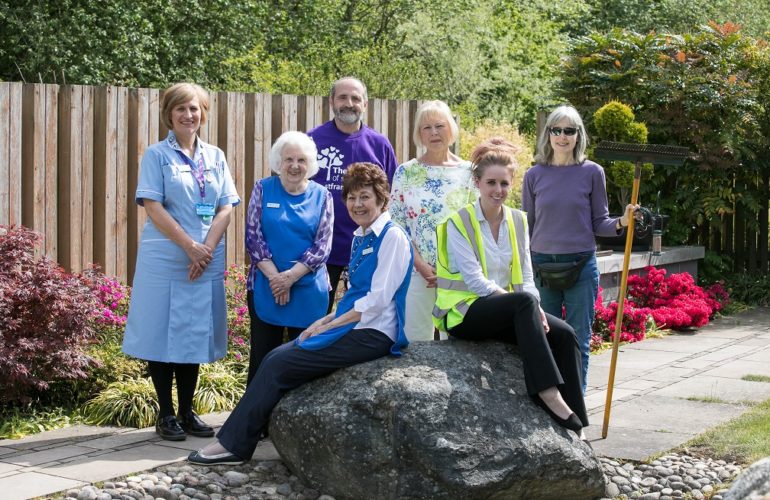 The Hospice of St Francis in Berkhamsted has double cause for celebration this week – as well as commemorating their 40th anniversary they have received The Queen’s Award for Voluntary Service, the highest award a voluntary group can receive in the UK.

The award, which aims to recognise the outstanding work by volunteer groups to benefit their local communities, is the equivalent of an MBE, and was created in 2002 to celebrate the Queen’s Golden Jubilee.

Since The Hospice of St Francis was founded by a small group of volunteers 40 years ago this week, volunteers have been its heart and soul. The hospice now has 1,200 active volunteers aged 14 to 90, fulfilling 70 different roles from catering crew to counsellor, receptionist to sales, administrator to ambassador and trustee to carer.

With six volunteers to every paid member of staff, the majority have given between 10 and 40 years’ dedicated service. The award celebrates all of their work, past present and future.

Mark David, 58, from Chesham, who has volunteered with the Trusts Fundraising Team for two years and was part of the hospice group who met the QAVS Assessment Panel, said:

“Volunteering enables me to both do something in memory of my late wife Margaret, who was so wonderfully cared for by the Hospice eight years ago, and also to contribute to a fantastic organisation.

“I wanted to give something back but I was also looking for more structure in a socially engaging environment to help me recover in my bereavement, and the hospice has given me that and so much more. Something I find very positive every time I go there is the professional approach that is marbled throughout the organisation – everyone who works there is extremely supportive. I’m also now a dedicated member of the ‘Jog On’ running group associated with the Hospice which has had a really positive effect on my life.”

Volunteers say that the trust placed in them, the depth of support and training they receive, along with the hospice’s reputation, purpose and role in their community are what inspires and motivates them.

“I am absolutely delighted that our volunteers and the hospice are being recognised with this collective MBE. This is a prestigious award and a huge tribute. Volunteers undertake so many essential roles and their loyalty and dedication has taken us through the best of times and some of the most difficult times in the last 40 years.

“Without them we simply would not be able to do what we do. On behalf of everyone who works at the hospice, I would like to thank and congratulate each and every one of our volunteers, past and present.

“This year is a very exciting year, in celebrating our 40th birthday this week, we look forward to recruiting and supporting many more volunteers – our ambition is to reach ten volunteers to every paid member of staff – who we know, together with our incredible team of current volunteers will play a fundamental role in our future too.”

Representatives of the Hospice will receive the award from the Lord-Lieutenant of Hertfordshire Robert Voss, CBE, later this summer along with a certificate signed by Her Majesty The Queen, and a domed glass crystal.

Meanwhile the hospice launched a short film this week capturing the most poignant moments from the last 40 years: