Milton Keynes to Paris cyclists raise over £20,000 for Willen Hospice 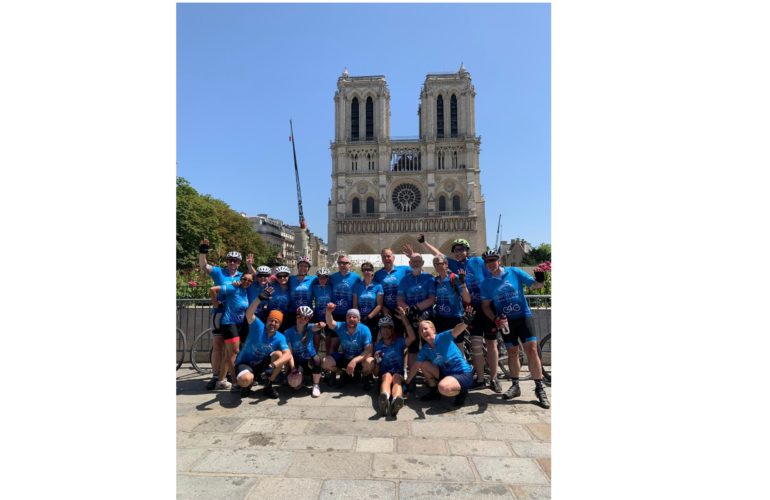 A group of cyclists who embarked on a 300km ride from Milton Keynes to Paris have raised more than £20,000 and counting for Willen Hospice.

The team of 16 spent four days cycling the route, which took them from the hospice in Milton Keynes to Hampton Court in London, where they started their ride to the ferry port at New Haven, across the channel to Dieppe, and onwards through France, before reaching Notre Dame in Paris, their final stop.

The cyclists were given an extra challenge after they were hit by a record-breaking heatwave. They cycled in 40+ degrees, with temperatures reaching 47 degrees Celsius on the final day.

“This was an incredible challenge in very difficult weather conditions. The cyclists have raised an incredible amount, with donations still being received. This money will make a huge difference to our patients and their families at a difficult time.  Thank you to Chris Blackham and his amazing support team from Cyle4Good for supporting this cycle challenge and ensuring all of our cyclists arrived safe and sound, albeit very hot!”

“What a ride and what a challenge – our riders not only had to cycle a phenomenal distance, but also had to do it in increasing temperatures. A stunning achievement but it was worth it for such a great cause!”

“I’m so pleased that we managed to raise such a fantastic amount. I really enjoyed the MK2Paris challenge, it was a great opportunity to make new friends and see some beautiful sights along the way.”